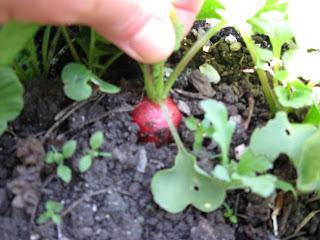 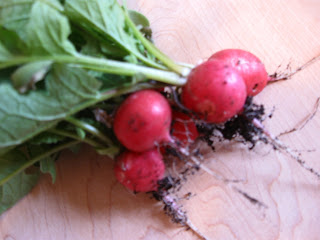 We pulled a few little radishes out from the garden today - and they were spicy, juicy and crunchy and a beautiful colour! I'm saving the tops to use in soup later on. What a nice way to welcome Spring. this from Wikepedia :

Radishes are rich in ascorbic acid, folic acid, and potassium. They are a good source of vitamin B6, riboflavin, magnesium,copper, and calcium. One cup of sliced red radish bulbs provides approximately 20 calories or less, coming largely from carbohydrates, making radishes, relative to their size, a very filling food for their caloric value. And their history is from practicallyedible.com:

Radishes probably originated in China, and made their way across Asia, into the Middle East, and thence into Europe. Europeans introduced them into Central America around 1500; the British brought them to North America when they settled there. The Egyptians and Greeks raised and ate Radishes. The Romans raised and ate many more varieties, including some that looked like our common round ones. They were certainly being grown in England by the 1500s, though probably much earlier. European Radishes, it seems, used to be much larger in general, more like the Asian ones. There is no written record of the small ones until the 1500s. 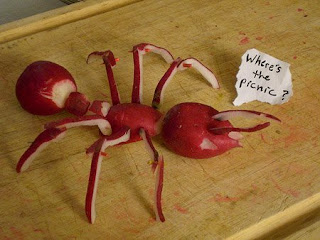 In France, Radishes would be served when you began a meal, to clean your palate and get it ready for the delights that were follow. In the same vein, Ben Johnson suggested eating a Radish before drinking wine.

Since radishes are a cool-weather crop, and it's quite cool this May, I am definitely sowing more this week. Especially to try next time I'm wine~tasting. After a few glasses of wine, maybe I'll carve a few radish ants! (picture from www.uphaa.com).

Posted by gumboot goddess at 7:31 PM