Last of the Leeks 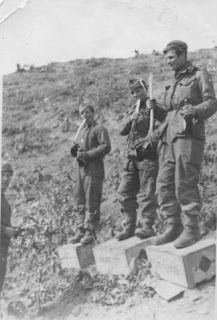 There are exactly 6 lovely leeks left growing out in the garden. They are destined for a leek and potato pizza! But first,I read a little about the history and lore of the leek: in 640 A.D. the Welsh wore leeks in their hats to distinguish themselves from their enemies in the battle between King Cadwallader of Wales and the Saxons. Welshmen wear leeks on March 1st, St. David's day to commemorate their victory. Leeks have been cultivated for more than 3,000 years, and are native to the Mediterranean area.In France, the leek is known as Poireau, which is also a derogatory term meaning 'simpleton.'Maybe because leeks are so simple to cook?Welsh soldiers uphold the tradition of eating a raw leek each year in memory of St. David. In England there is a giant leek-growing contest! This is the world's largest so far: Says the grower John Soulsby: "It’s an absolutely huge leek – it measures 23½ inches 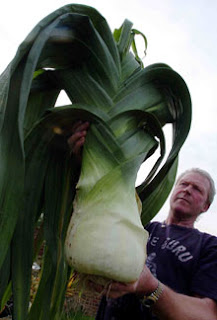 around. It didn’t even get fed – it grew on its own steam.” It weighed 181b. 5oz. This is a recipe I'm using for the leek and potato pizza - I use the foccacia dough recipe from Rebar Cookbook for the pizza dough (it makes 2 pizzas):

Sounds unusual? It is but your family and guests will be amazed at how terrific it tastes. It freezes well after cooking so double the recipe.

In large pan, heat oil over medium-low heat; cook garlic, mushrooms, leeks, rosemary, salt and pepper, stirring, for 6 to 8 minutes or until mushrooms have released their liquid and leeks are tender. Toss potatoes in leek mixture to coat.

Top with potato slices with mushrooms and leeks in overlapping concentric circles. Sprinkle with Cheddar and Mozzarella. Bake in 450° F (230° C) oven for 20 to 30 minutes or until crust is crisp and potatoes are tender.

Leftovers for lunch tomorrow, too :-)

LEEKS: BEFORE AND AFTER 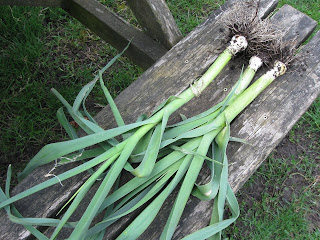 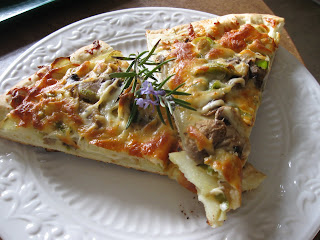 Posted by gumboot goddess at 6:32 PM